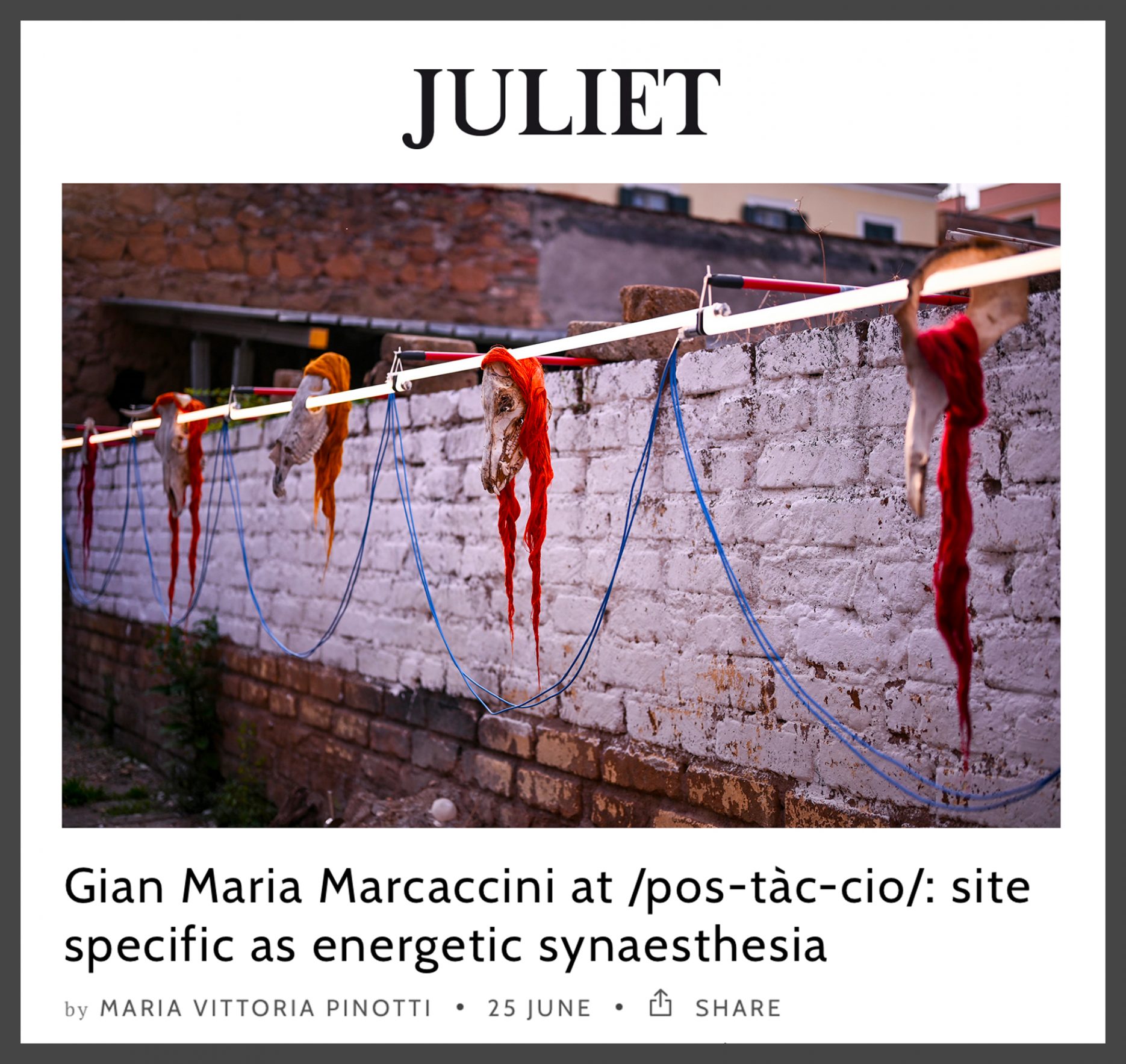 It seems that nowadays we are accustomed to confining our lives inside a domestic, social and working space, regulated by rules that we ourselves administer. This kind of approach leads to the disruption of our territorial system, which finds itself subject to rules of autarchic control. The controllability of every aspect of our lives, and the desire to give order to routine’s rhythms, are aspects that also influence the creative mind of the contemporary artist. Hence, art is to be considered as a form of synesthesia, in which unpredictable and random relationships intertwine to the point of incorporation. Thus, these combinations of memories and emotions, animated by inner dynamisms, develop in the spaces we live in every day.

From these assumptions a question arises – what is a lived space, is it possible to define it as a territory? The sociologist Erving Goffman encourages us to have an open mind towards this concept, which is to be considered as a manifestation of human behavior, or rather a setting for behavior[1]. This way, a bond is generated between the environment, space and the related anthropic attitude, which leads us to consider the territory, to use Goffman’s words, as “any space that is limited by obstacles to perception” [2]. A similar overall view is applicable to the new exhibition format proposed by the artistic group OFF1C1NA, called /pos•tàc•cio/ – curated by Spazio Y – which involves the creation of site-specific interventions in the area outside the collective’s headquarters. Each artist, in order to take part in the creative initiative, must adhere to certain rules. The intervention must be accomplished in five days and then remain available to the public for the following ten days. Materials found in situ must be used for the work, as well as other residual objects left by the predecessor artist. All this demonstrates how, by acting in advance with an expansive mindset, an exhibition project can also be conceived in a space that is not a museum, foundation or art gallery. It is not surprising that such activities are currently reshaping the image of the contemporary art system, while also changing with the energetic initiatives directly managed by artists.

/pos•tàc•cio/ is an abstruse place, in the sense that it presents itself as a surreal combination of the spoils of the moment: the territory is not present on city maps because it is hidden in the urban fabric like a temporal treasure chest, as an unsuspected space for the unaware passer-by who can access it through a simple iron gate, which does not give any hint to the extraordinary nature of the place. Among the objects placed in the oblong one hundred square meters space, one can see tools useful for the creative phantasmagoria of the artists’ collective composed of Paolo Assenza, Raniero Berardinelli, Fabrizio Cicero, Toni Franz, Ilaria Goglia, Katia Pugach and Germano Serafini. The history of this place is contained in its name, which may well throw toponymy enthusiasts into a panic, considering its lexical alteration and its pejorative suffix, which in reality denotes a site where the only rule that reigns is the principle of layering. This middle ground, which gathers together stories, dating back several years ago, bears traces of the moment of confrontation and exchange between artists, since there have been several who have passed through, leaving objects that are now collected in the courtyard. Paolo Assenza (b. 1974, Rome) notes that this unusual format is to be considered as a good solution to sabotage the classic and obsolete exhibition methods; he states that in the project “there is nothing that resembles a classic exhibition space. For the artist it is a challenge to dominate an indeterminable space, the act of displacement and randomness that the creative person must be able to master in a situation of subjective balance”.

The first artist called upon to conceive a site-specific installation is Gian Maria Marcaccini (1970, Camerino), whose installation will be on view until June 27th  2021. He was able to devise a grammar of installation that is inextricably intertwined with the space, without bending it in an instrumentally devious way. The basis of the project is a bizarre dialogue between the disturbing place and all the present objects. Furthermore, the installation always changes, leaving the final conformation in a state of becoming. The result was two works characterized by a vital creative language, marked by a spatial articulation and an expressive chromatic and sculptural strength. On the oblong wall there is a display of animal skeletons – some of them found on site – precariously balanced on neon lights. The skeletons seem to belong to primordial monsters, so much that they look like disturbing creatures from a distant past, now re-proposed as relics that are given a new life, rebelling against progress and a society that wants them to be obsolete, outdated and meaningless. Skeletons that come alive with the passing of neon, but also with hemp fabrics that rise to corrosive chromatic material pulses, rutilant bony iconographies that stand as in a refined game of energetic synaesthesia that rhythmically mark the space.

These installation forms make it possible to conceive and evoke metaphysical and surreal landscapes, taking us far from the places of territorial physicality, since visiting Marcaccini’s installation feels like living in a deserted place. This conjecture does not seem absurd, but it seems that we are not in Rome, but in the American Texas town of Marfa, known to be a meeting place for creative minds. Hence, at /pos•tàc•cio/ we seem to be experiencing a setting from a magic ritual, as suggested by Ilaria Goglia’s critical text, which identifies the exhibition itinerary as a sort of initiatory path “studded with enigmatic fetishes, inviting us to a collective ritual of crossing“. The ritual feature that distinguishes the assembly also returns in the entire format, presenting itself according to a time schedule defined by precise rules, repeating itself cyclically as if it were a ritual. In this way Marcaccini’s works, like those of his successors, are characterized by their unicum: hedonism towards the place and the fatal attraction of its unusual ecosystem. These elements are capable of releasing the artist’s creative spirit aimed at creating an imagery capable of cyclically renewing itself with wonder, to reveal the magnetic and hypnotic nature of the place.

In the installation with animal bones there is a spasmodic search for the balance of the paused forms and their sculptural and light dialectic, whereas the subsequent video artwork is composed of a sculptural skeleton built with recycled materials from a structure found on site. This way, the artist makes a transition from three-dimensionality to the fourth dimension, referring precisely to the technological tools with which the video is produced, so that the work becomes a new morphological solution for representing a virtual reality. The video speaks to the public in an electromorphic language: the artist has drawn his face with deliberately thick, full-bodied, carnal virtual brushstrokes, which come to life with the movement of his muscles, while writing appears at the bottom to encourage us to reflect on the value of human existence and its volatility. In this way, a mental conversation is established between the artist’s aliasand the viewer, reminding us that art is capable of transcending all barriers and has immense communicative power. But all is not as it seems, since in the video it is the eyes that betray the subjective nature of the artist, who seems to be clearly recognizable by the bunch of hair that has always characterized his appearance and by the emphasis on the shape of his ears, with which he seems to want to orient himself in the world. Thus, if the physiognomy shows that we are dealing with a self-portrait of him, we are nonetheless surprised by the absence of pupils in the eyes, which look at us but unfortunately do not see us. Marcaccini wants to ask us, in other words, a question that goes far beyond the dispute over human existence, touching on creativity and its limits. For the artist, a video, produced with the aid of technological tools, is enough to make cognitive the remote possibility of communicating the uniqueness and vulnerability of man: the alias is therefore the emanation of his emotions that present themselves subjectively, without any censorial filter.

In both site-specific works, Marcaccini demonstrates, with effectiveness and power, his ability to manage a language in which all the forms are characterized by interweaving of calibrated inspirations, drawn from vital and natural phenomena that maintain a congenital relationship with the environment. In these creative developments he carries out an etherealprocess, that is, he makes the sculptural material exhale an energetic tension of creative synaesthesia, gracefully inviting and involving the spectator to partake in a fantastic dance where what counts is only what is felt.

This site uses Akismet to reduce spam. Learn how your comment data is processed. 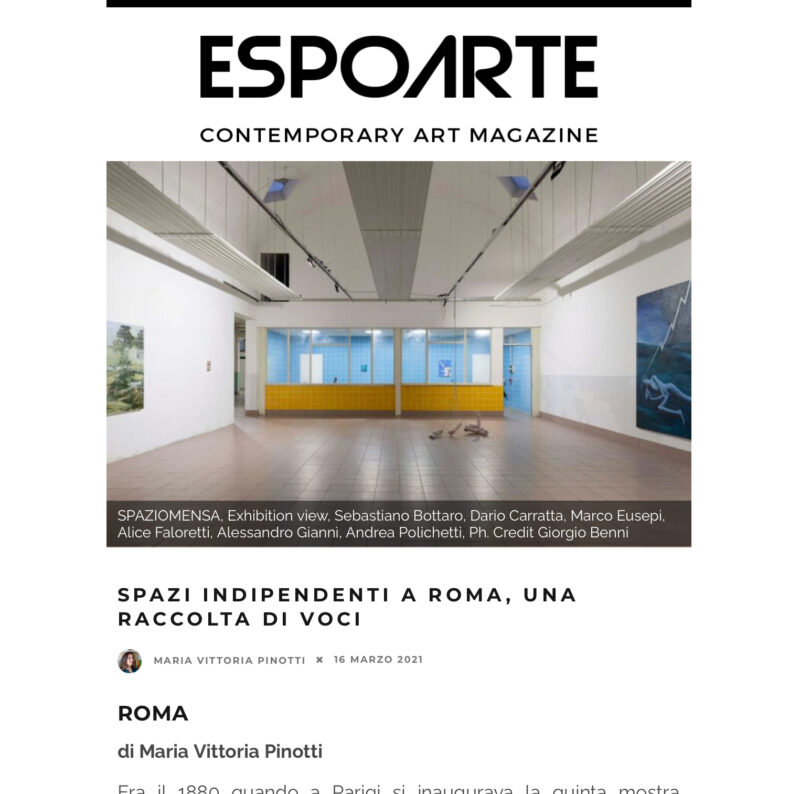 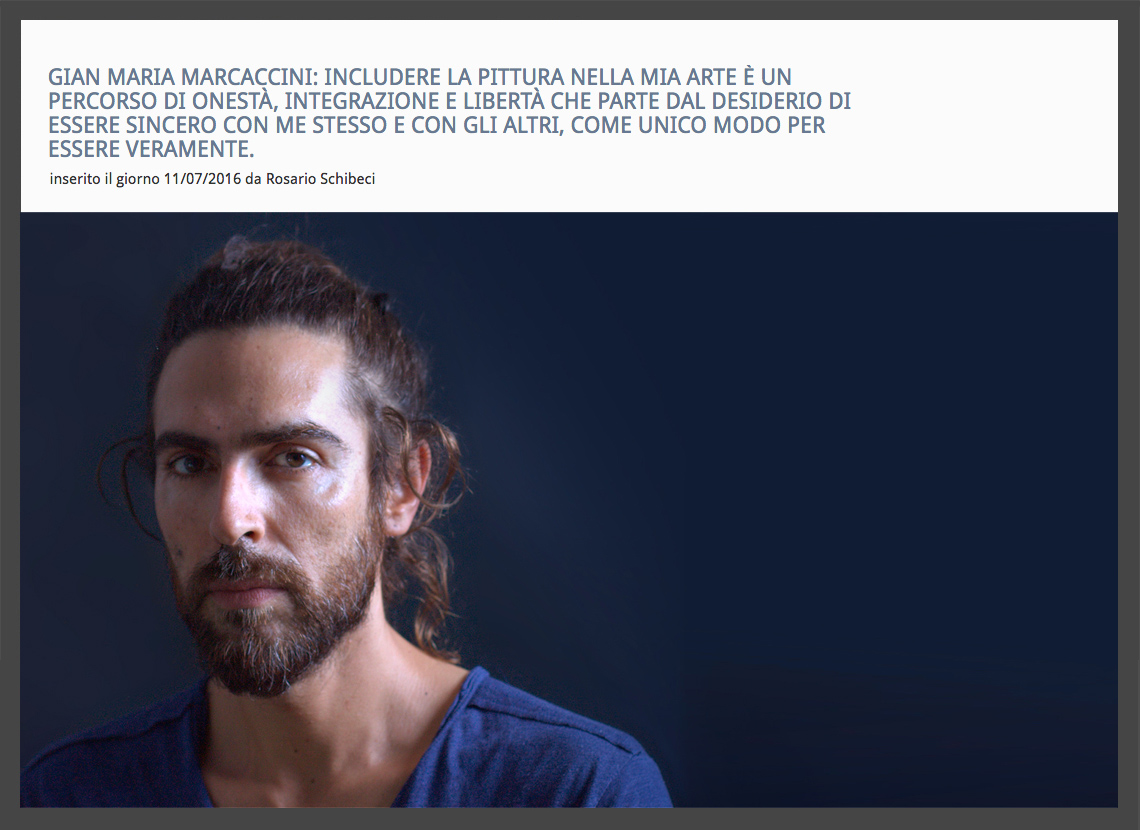 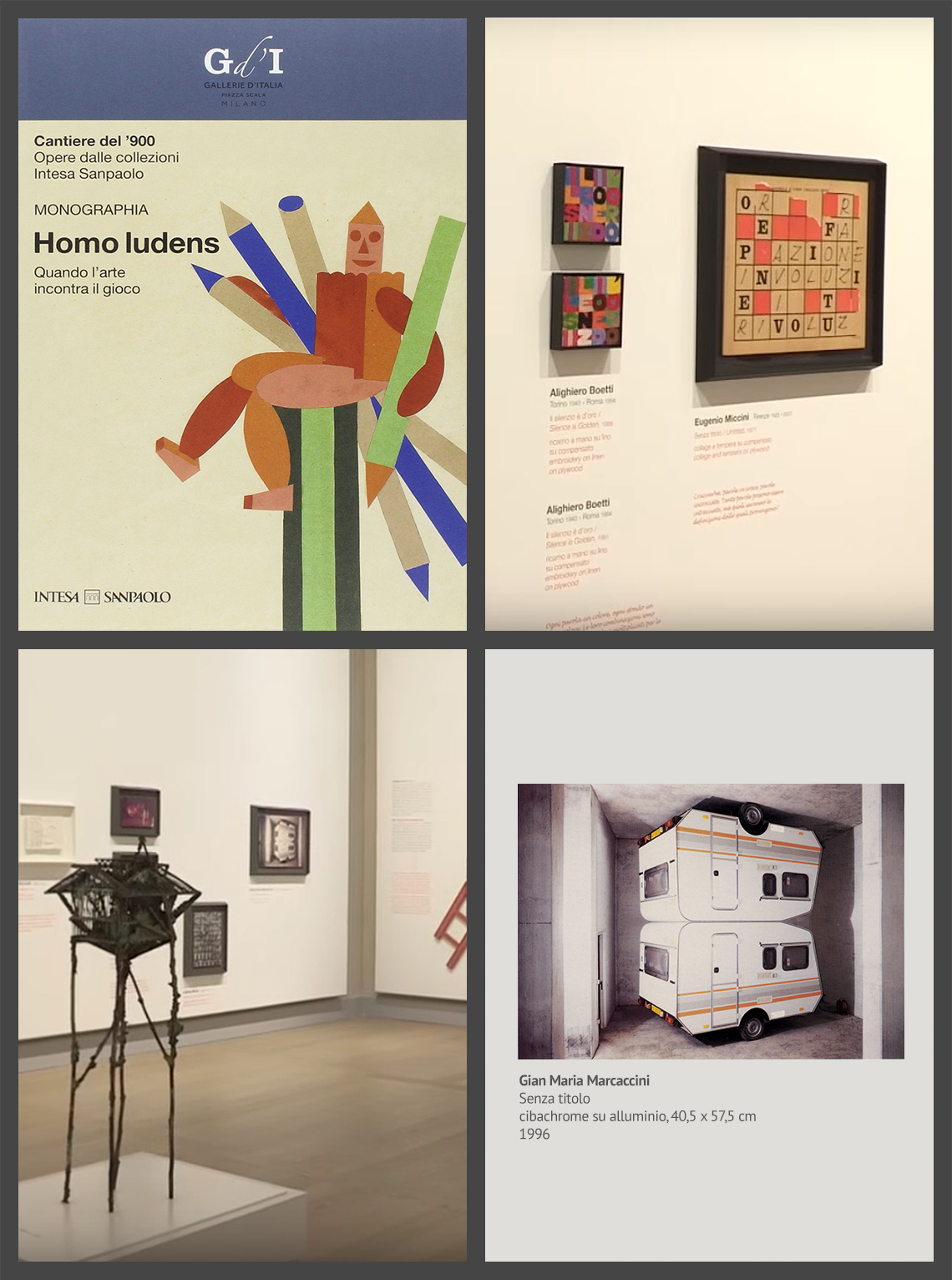 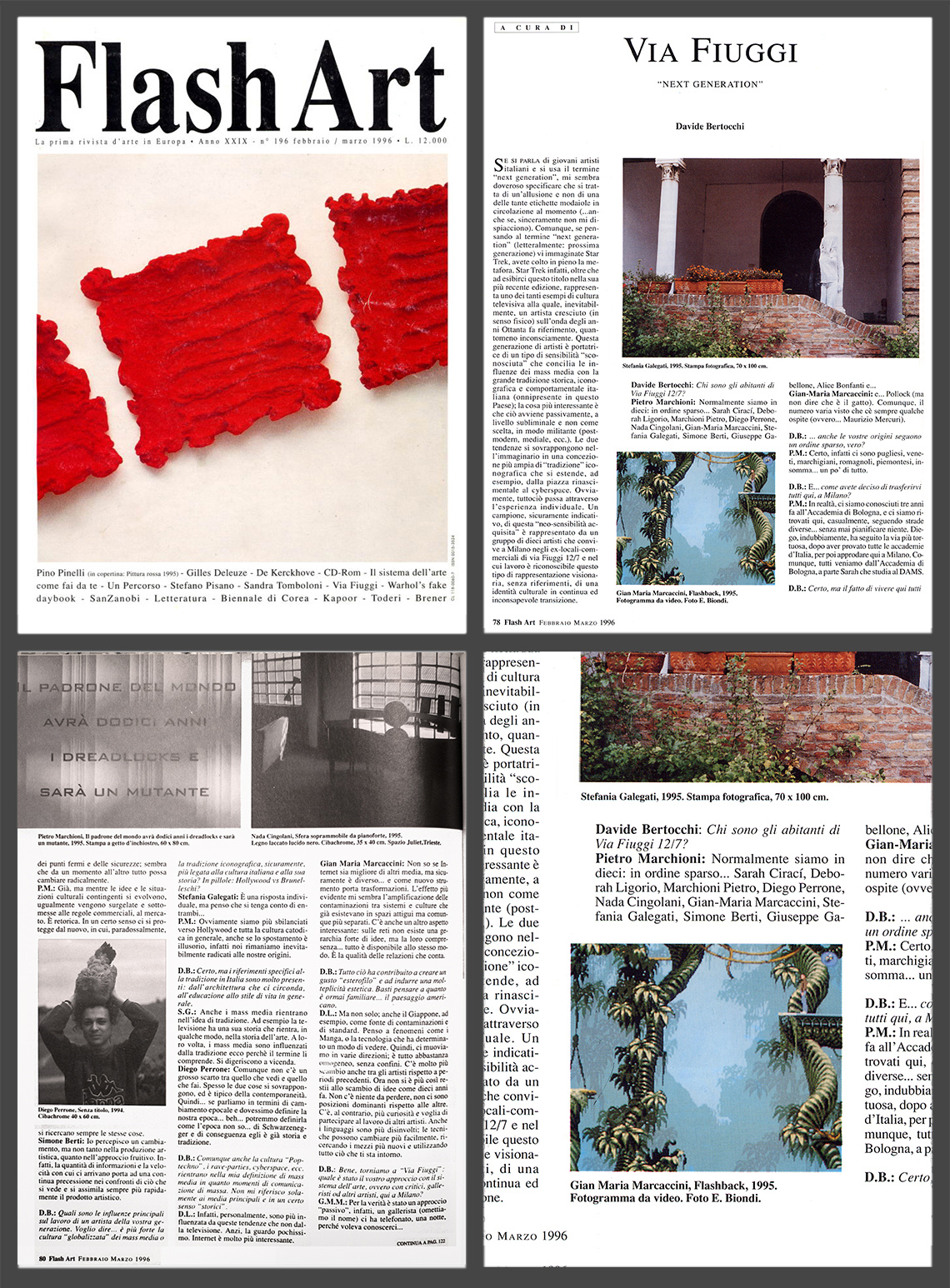